The Million-Dollar Question: Bonus Entitlements During the Reasonable Notice Period

SJO Legal PC was involved in the case of David Matthews v Ocean Nutrition Canada Limited (2020 SCC 26), in which the Supreme Court of Canada (‘SCC’) handed down a significant judgment this month. The highest court in the country took the opportunity to clarify fundamental legal principles underlying an employer’s duty to act in good faith and the obligation to provide employees with reasonable notice of dismissal. Notably, the Court clarified when employees are entitled to bonuses that become due during the reasonable notice period. Matthews, the employee in this case, was awarded a $1.1 million bonus payment that became payable during his reasonable notice period, because the SCC found that the terms of the bonus plan did not unambiguously exclude him from receiving same. The Court signalled its intention to subject the language in contracts and incentive plan documents to strict scrutiny and to favour the employee in the case of ambiguity, solidifying a higher standard for employers in the creation of their employment documents.

Matthews was a senior chemist at Ocean Nutrition Canada (‘ONC’) and participated in ONC’s long term incentive plan (‘LTIP’), which would, inter alia, offer payments to its employees upon the sale of the company. Ten years into Matthews’ employment, ONC hired a new Chief Operating Officer who began a “campaign to marginalize” Matthews. The LTIP was a principal reason that compelled Matthews to continue his employment despite being lied to and having his responsibilities reduced, as he anticipated that ONC would soon be sold. However, he eventually left the company and started employment in a new organization. ONC was sold approximately 13 months after Matthews’ departure. He did not receive a payment under the LTIP because ONC determined that he did not satisfy the terms of the plan, as he was not actively employed at the time of sale. Matthews filed an application against ONC.

Trial Court and Court of Appeal of Nova Scotia

The trial court found that ONC constructively dismissed Matthews and that he was entitled to a reasonable notice period of 15 months. Furthermore, the court recognized that (a) had Matthews not been constructively dismissed, he would have been a full-time employee, and (b) the LTIP did not unambiguously limit or remove Matthews’ common law right to damages. Thus, he was entitled to damages equivalent to what he would have received under the LTIP.

The Court of Appeal of Nova Scotia found that Matthews was not entitled to damages for the lost LTIP payment, based on their interpretation of the following sections in the LTIP:

The [LTIP bonus] … shall not be calculated as part of the Employee’s compensation for any purpose, including in connection with the Employee’s resignation or in any severance calculation. [2.05]

The SCC allowed the appeal and restored the trial judge’s award. The Court relied on Rensburg JA’s analysis in Paquette v TeraGo Networks Inc (2016 ONCA 618), finding that it adheres to the understanding that a contract “remains alive” when assessing an employee’s damages, in order to determine the compensation an employee would have been entitled to but for the dismissal. The two-step analysis a court should therefore embark upon in assessing this type of claim is as follows:

Matthews was prima facie entitled to the bonus under the first step because the company was sold during the notice period. Thus, but for Matthews’ dismissal, he would have been entitled to the bonus payment during that time. The SCC further clarified that the consideration of whether a bonus plan is an “integral” part of the employee’s compensation package only arises where the facts demonstrate that the bonus is discretionary. In relation to the second step, the SCC found that the terms of the LTIP did not unambiguously take away or limit Matthews’ entitlement to the bonus. Language requiring an employee to be “full-time” or “active”, or language purporting to remove an employee’s common law right to damages upon termination “with or without cause” or even unlawful termination, does not suffice to remove an employee’s common law right in reality.

The SCC in Matthews v ONC provided a strict test in interpreting the language of incentive plan documents that attempt to limit or remove the common law right to bonus payments during the reasonable notice period. Employers should ensure that the language contained in their incentive plans is “absolutely clear and unambiguous” in providing that no amount of an incentive plan can be included in calculating damages for wrongful dismissal. 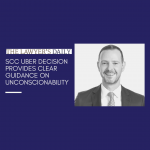 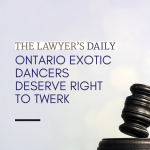